Building a Home out of Gingerbread – A How-To Guide

This post includes three parts: the history of gingerbread, how-to video, and recipes (at the bottom)

This video and post demonstrate an efficient and enjoyable way to make homemade gingerbread in the form of gingerbread houses and/or cookies and learn why this ancient food remains popular today.

The Food Studies Institute’s primary mission is to encourage children and their families to consume plant-based foods with enthusiasm via sensory education about the diversity and health promoting characteristics of these foods. We research different foods within their historical context and document some of the interesting traditions and beliefs that have evolved around these foods. While gingerbread houses are typically not healthy to eat, they bring people together in creating something beautiful to look at (and sometimes eat) which is fun and instructive about common ingredients such as spices and how important they have been historically. Nutrition is one of the newest sciences and we think it is important to learn from the past about what people ate while applying contemporary knowledge to these foods and how they impact our future from an agricultural, health, and nutritional perspective.

Gingerbread is one of the earliest recorded recipes dating back to medieval times. There is archeological evidence that traditional gingerbread spices were used during the Neolithic Era and were sought after for about 5,000 years. The reason gingerbread recipes have survived over the centuries is because of the unique characteristics of the ingredients and their preservation properties. Spices are known to act as natural preservatives and their unusual flavors were a primary incentive for the spice trade.

Cinnamon, ginger, and pepper are important ingredients in most gingerbread and they were traded in Europe during ancient times. The Romans and Greeks developed a taste for spices and kept them in demand. Over time, this desire became almost obsessive among the wealthy. During the Dark Ages spices were scarce but highly valued:

Spices were part of royal dowries and magistrates’ pay. They were listed in inventories of the possessions of important people. They were gifts for a king, inspiration for a poet. Despite exorbitant prices, more spice by far was consumed per capita in the Middle Ages than today, according to French historian Pierre Gaxotte (Norman 1972:274).

The poor could rarely afford to purchase spices, but the rich indulged in enormous quantities. In fact, in wealthy households, spices were served as an after dinner treat and people would carry long pieces of them in their pockets to be eaten like candy (Norman 1972:275).

One reason why spices were so valuable is because they disguised the flavor of often putrid meats. Only the very wealthy could afford to grow enough fodder to feed their animals over the winter. It was necessary for most people to cull their herds in the fall and try to preserve the meat by salting or drying. Salt has been used for this purpose since prehistoric times and salt-mining greatly expanded from the Neolithic to Roman times (Brothwell 1969:162).

Not only were spices instrumental in disguising rancid flavors, they also seemed to counteract the excessive saltiness in preserved foods. Certain spices such as ginger have long been thought to contain preservative qualities as well as repel insects and retard microbial growth. It is no wonder that gingerbread was a popular food during the Middle Ages. It would keep indefinitely and added variety to an often monotonous diet. The expression “variety is the spice of life” is a tribute to the fact that most people grow bored when there is stagnation. Additionally, many spices are said to have medicinal qualities. Ginger was given to people during the plague and is said to be a remedy for stomachaches as well as other aliments. However, too much spice can create problems and interfere with some medications but the amounts used in most recipes are beneficial.

Spices were so important to people of this period that they were used as payment for labor at times. In this way the peasants could enjoy their beneficial qualities as well as the wealthy. For example, an agricultural laborer would be paid a pound of pepper for two or three weeks work (Tannahill 1973:189).

Much world exploration was inspired by the search for spices. Christopher Columbus, Marco Polo, Vasco da Gama, and Ferdinand Magellan all set out looking for the Spice Islands. They were followed by fleets of explorers from many countries questing spices.

Folklore arose concerning spices and their quest. A famous example from the Brothers Grimm comes from the story of Hansel and Gretel. The little lost boy and girl discover a house of gingerbread covered with frosting and candy. This favorite tale, written in 1812, is probably what inspired a few ambitious cooks to first construct gingerbread houses. Gingerbread houses later became popular during the Christmas holidays and is likely because the Hansel and Gretel opera written by the German composter Engelbert Humperdinck in 1893 was traditionally performed to mark the Christmas season.

Prior to refrigeration many foods would spoil and develop harmful bacteria which made them unsafe to consume if they were not preserved in a safe way. This was especially true of animal products so when it was discovered that salt and spices could retard spoilage and make the item more palatable, they were sought after during the colder months when it was difficult to get fresh food. Because ginger root and more tropical spices that grow in warm climates including parts of Asia, Africa, and the Middle East, these spices were in high demand for early Europeans.

The spice trade which began as a land movement eventually took place on water and led to the Age of Exploration. Just like strongly smelling herbs will repel insects from eating them, so too will strongly smelling spices. We have done experiments by leaving gingerbread out on a shelf to see if any insect or other critter will eat it and other than becoming stale the spices keep the gingerbread safe from predators.

Traditionally, gingerbread is made from honey (or molasses, a later sweetener), flour, and spices. The combination of spices always includes ginger fresh and/or dried, and cinnamon. Depending on taste preferences and availability, cloves, allspice, nutmeg, pepper and cardamom are also included. The fragrance of the spices will permeate the room and can last for years which is one reason gingerbread is associated with winter holidays when people spend more time indoors.

We are going to walk you through the steps of making a gingerbread house which has become a tradition in our family for years. It is a fun activity for friends and family and we hope you embrace this activity as we have. Once you have made your homemade gingerbread you can experiment with recipes and design so you can have a new edible house every year! You can choose to eat your gingerbread house or save it in a box for the next holiday season.

There are endless variations of recipes, designs, and decoration tips that are available. Gingerbread has become so popular in recent years that there are competitions throughout the United States. One can make vegan, gluten-free, and even non-candied gingerbread houses decorated with dried fruit, nuts, and seeds. We hope you enjoy learning about basic architecture, culinary techniques and design by engaging in this activity. Enjoy!

Start with a “Starter Home”

We have made many different gingerbread houses with kids and families over the years. A common mistake is to be too ambitious and risk the house being built without a solid foundation which is never a good idea. We recommend starting with an “A” frame design and experimenting once the basic concepts are understood. Here are the dimensions for a nice size “A” frame starter home: 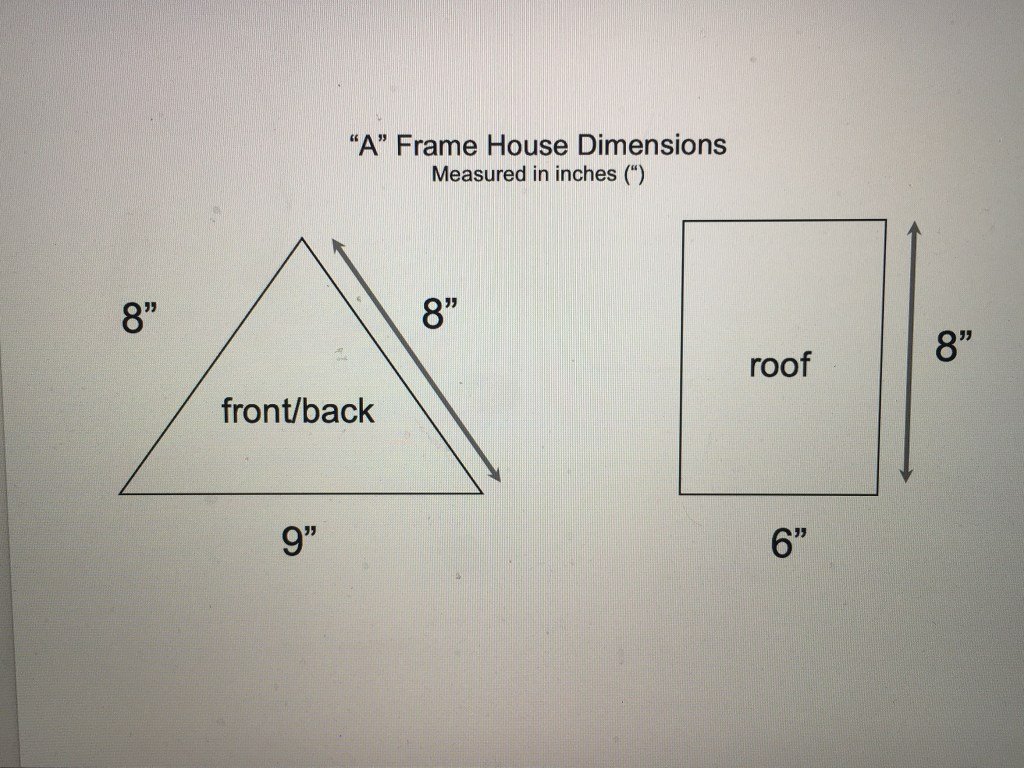 Note: A gingerbread house will smell wonderful especially if you are heavy handed with the spices.

If you make a gingerbread house, send us a picture to post on the blog! Email photos to: ariel@foodstudies.org

“We made your gingerbread house recipe this year!! The kids loved making it!!! It’ll be a new tradition!” – Christine

Food is Good to Think Blog