“Little is nobler than presiding over a kettle of homemade soup.” 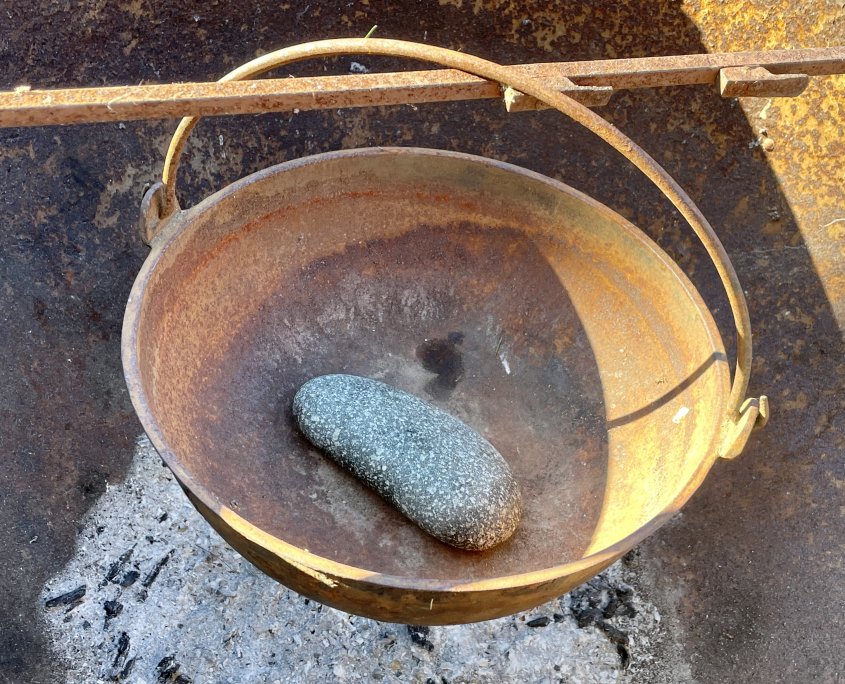 Most of us have read the story of Stone Soup, a folktale that is believed to have begun in France in the oral tradition. The first known person to write the tale, Madame de Noyer, a French journalist, died the year before it was published. There are many different versions of the story which was first published in English by Robert Moser in the European Magazine: and London Review, in 1806 and in the United States in 1808 in The American Magazine of Wit: ‪A Collection of Anecdotes, Stories, and Narratives, Humorous, Marvelous, Witty, Queer, Remarkable, and Interesting, Partly Selected and Partly Original. [1]

Many of the versions of the tale contain the same general theme no matter what language they are in. The general theme of the story is quite charming about a hungry traveler who stops in a village looking for something to eat. The people he encounters say they have no food to spare.  The traveler then asks them if they have a pot so that he can cook his famous stone soup to share with them. Intrigued, the villagers comply and the traveler puts a stone in a pot full of water he gets from the nearby river and begins to boil the stone.  As it boils, the traveler says, “this soup is good as it is, but would be really good if one added some onion”. A villager says, “I have an onion and brings it to the pot. The soup begins to smell good and then someone says, potatoes would be delicious in this.” And so it goes, until the villagers keep adding ingredients until it becomes a robust soup that fills the air with aroma. Everyone then sits down to a full bowl of delicious soup and states “soup from a stone, imagine that!”

This story can be interpreted in many ways, but the general theme is that it is good to share what you have and that a good meal makes people happy and can be a bonding experience. Food can be a great equalizer since all people must eat to live, no matter who they are, what their politics or religion may be and if they are rich or poor, black or white, and a multitude of other differences.

Soup can serve as a one-pot meal that is easy to prepare and provide one with all the nutrients they need for the day. It is believed that soup was one of the first prepared foods dating back 20,000 years ago as soon as a pottery container was first made in China. [2] Hot stones were used to heat the water and whatever other ingredients were available were added. Soup cookery became popular among rich and poor, and many innovative recipes based on ingredient availability and taste evolved. Some soups were so popular they became classics and led to a new industry of canning, freeze drying and making bullion stocks. For gardeners, soup is an excellent way to experiment with recipes as produce ripens and there may be an abundance of certain ingredients. An addition of spices and/or herbs can dramatically alter the taste so one never needs to become bored with the same general recipe.

Because soup contains liquids (usually water), it takes up space in the stomach and makes one feel full. Soup can also serve as an excellent source of hydration. If soup is made with farm fresh whole ingredients, it can easily satisfy your nutrient need for the day. The cooking time to prepare soup varies depending on the ingredients used but most soup can be made quickly – as soon as the ingredients are tender, it is ready to eat or, it can be gently simmered for hours. Toppings also can be changed to enable different flavors to dominate so one basic soup recipe can last a week never tasting the same depending on what is added. Soup is an excellent way to introduce people to different cultures if the flavor profiles of that culture are featured in the recipe along with traditions associated with the recipe. One can engage in a culinary tour of the world just by experiencing their indigenous soups which will demonstate climate, geography, culture, befiefs and agriculture.

Soup can be extremely economical if one has access to a cooking pot (should be nonreactive such as stainless steel), water, and wild plants that are safe for humans to consume. One can forage for safe ingredients and learn about botany in the process. The addition of fresh herbs and/or spices will make for a very healthy meal for pennies that will nourish the body as well as the soul. One can experiment with the stone soup recipe by having a soup party and asking your guests to bring one or more of their favorite ingredients for the common pot. If stones are used in the soup, make sure that they are well washed and large enough to see so they can be easily removed after the soup is ready. Also make sure that the stone you use is non toxic so you can ‘flavor” the soup and perhaps add some minerals to the mix. 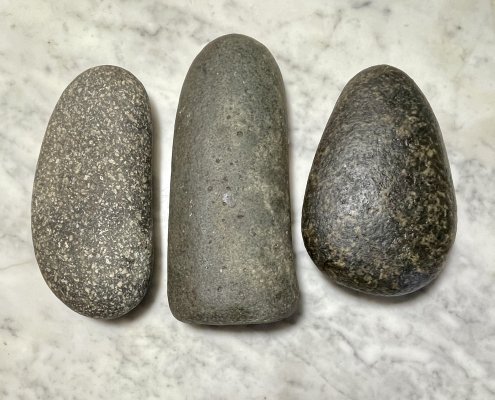 I have a few stone tools that look very similar to the stones used by early people thousands of years ago and are featured in museums as early effective tools. They work extremely well to smash nuts, garlic  or other foods without requiring electricity or much effort and fit perfectly in my hand and I love using them. I highly recommend stones as an easy to use kitchen tool as well as a basis for stone soup.

There are many different categories of soups based on different themes and there are infinite combinations possible. The internet is full of recipes that are delicious and are easy or difficult to prepare depending on your interest. Soup is an ideal way to prepare a meal that can last a week and can be varied each day. It can be economical or expensive and fills the belly especially if healthy whole foods form the primary ingredients. Soup is a universal food that has nourished people around the world throughout history. It can be fun to create your own recipe or invite friends/family to develop a new favorite recipe that begins with a stone (or not). As we go into the winter months there are few things as comforting as a hearty bowl of soup.

Soups around the world

Make your own stone soup. Below are some farm fresh ingredients to spark your creativity.

“Soup puts the heart at ease, calms down the violence of hunger, eliminates the tension of the day, and awakens and refines the appetite.”

Thank you to Wegmans grocery store in Ithaca, NY for providing foods for this blog.

Celebrating Indigenous Foods of the Americas for Thanksgiving