Celebrating Indigenous Foods of the Americas for Thanksgiving

“Nothing will benefit human health and increase chances for survival of life on Earth as much as the evolution to a vegetarian diet.” 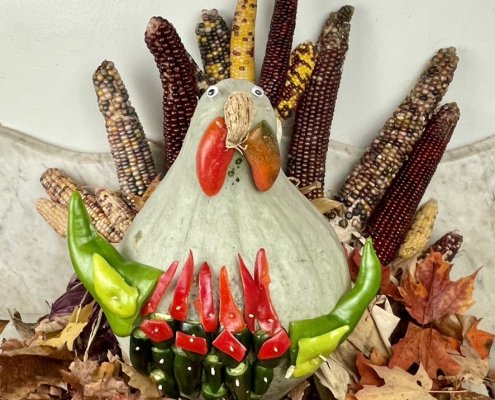 Plant foods from the America’s have contributed to approximately three quarters of the food diversity we enjoy today globally. Indigenous foods from North, Central, and South America have varied our diets to an astonishing degree throughout the world. Would Italians have such a refined, delicious cuisine if they did not grow and develop tomato recipes? What would happen to the Irish without their New World staple food, potatoes? (it happened once with dire results during the Irish potato famine). And would Indian curries without hot peppers be as much fun to eat?  Can you imagine eating desserts if there were no chocolate and/or vanilla? These foods, among many others from the Americas, have influenced and changed world cuisine and became a catalyst in the development of new classic recipes that are vital to their culture and loved by many. 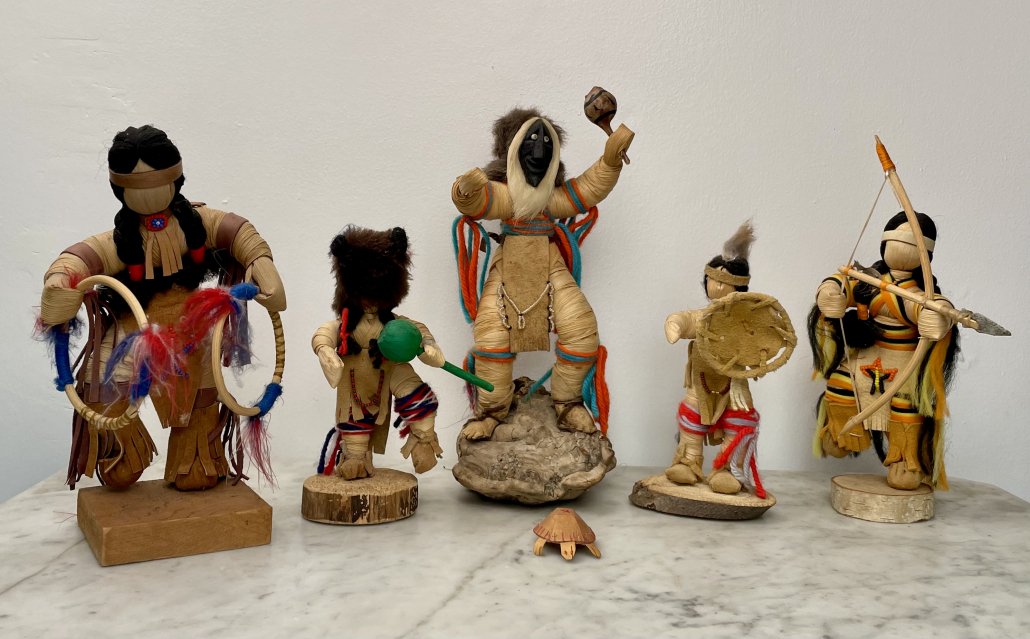 Indian tribes in the Americas are as diverse as many of the foods they gathered, grew, and hunted. They survived for thousands of years eating what was locally available to them given their climate and terrain. They were masters at observing and giving thanks to what nature offered and had ceremonies to ensure a good harvest. Everything they ate and grew was treated with reverence to the earth and provider. They had enormous respect for the soil and used every part of what they ate or grew in creative and practical ways. All parts of the plant or animal were used, and they composted and recycled to enrich the soil which was sacred to them. 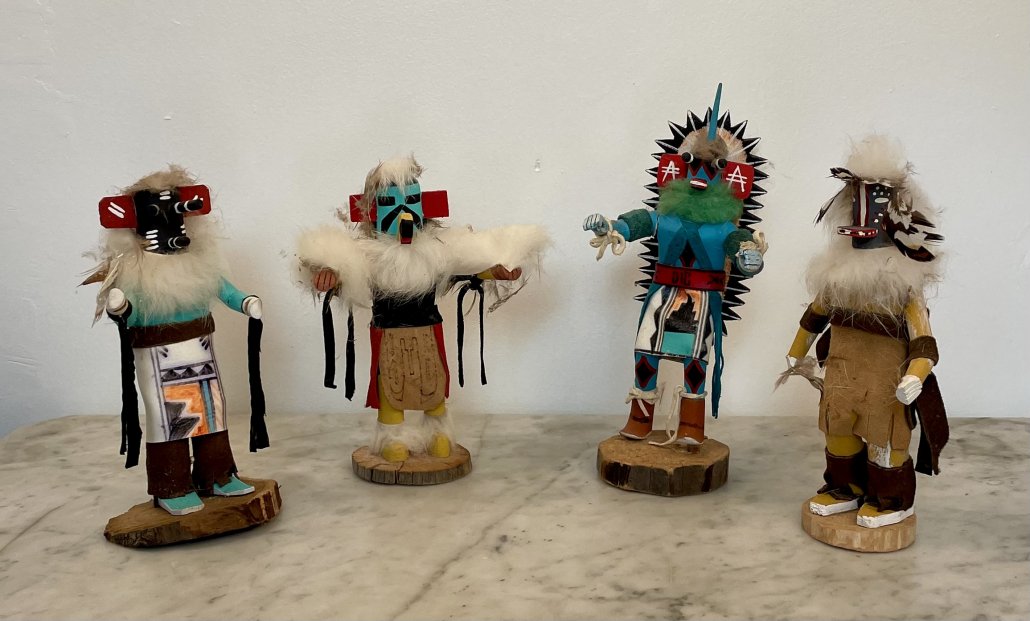 The Americas historically have included a wide range of people, languages, and growing conditions. The different tribes were able to adapt to their specific environment and develop their unique cultures and innovative agricultural techniques that are sustainable to the earth. Unfortunately, when the Europeans and others came to their land these traditions were compromised and their land was often taken from them. After Columbus sailed the ocean blue in 1492 and learned about the abundant land full of resources, others from Europe decided to make the long journey for various reasons including to escape monarchy and seek religious freedom.

When the Pilgrims sailed to Massachusetts from England and the Netherlands on the Mayflower to form a new colony in 1620, 102 passengers were on board along with 30 crew members. Half of them died of disease and scurvy from poor nutrition and infectious disease.[1] 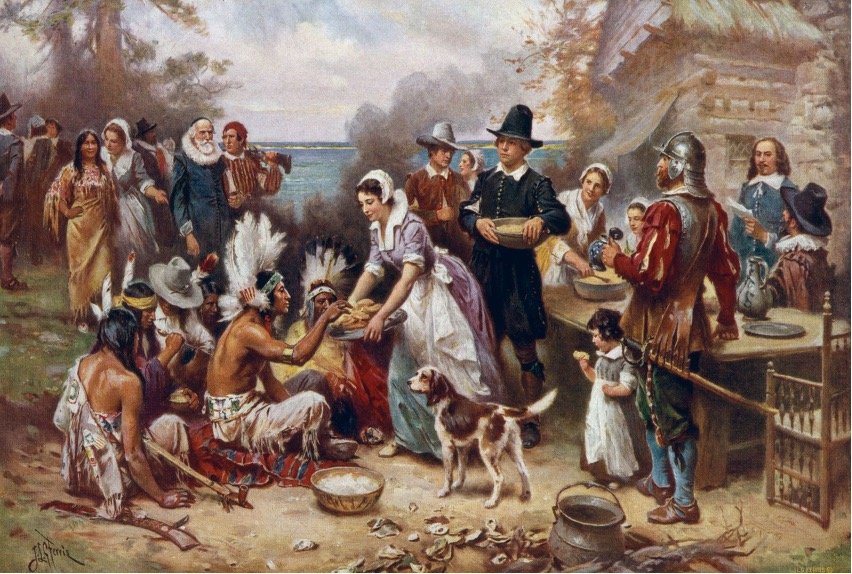 It is believed that Squanto, an Indian who had been captured by the British and enslaved, escaped from England back to America. He spoke English and was able to communicate with the Pilgrims and showed them how to plant and grow American native foods and avoid poisonous plants. The Mayflower survivors were successful in growing the three sisters – corn, beans, and squash after being taught by the Indians and were able to establish a colony. As a thank you, in late autumn, 1621, the pilgrims invited the local Indians who saved them from starvation to a celebratory feast which became the first Thanksgiving.  While there is not consensus on the exact details of the event or the foods consumed, it generally is believed that the feast lasted three days and included a variety of corn, beans, squashes along with wild game (deer, ducks, geese) and seafood. Turkey may or may not have been on the menu. There was no sugar, flour, sweet potatoes, or potatoes on the menu, but cornbread and cranberries were likely featured.

As we celebrate and honor the foods of the Americas, we need to teach our children to recognize how the Native Americans deserve to be thanked, appreciated, celebrated. and honored.

Cafeteria Art painted by students in NYC 1999, of the Three Sisters

Food is Elementary students at NYC Public School (P.S. 61 – 1999), paint the Three Sisters – Corn, Beans, and Squash from Native American culture. in the school cafeteria with artist Dan Burgevin.  Each panel represents a different stage of development from planting the seeds to the harvest. The paintings also show life under the soil where fish is buried, and compost added to enrich the soil with organic materials. (Designed by Antonia Demas, Food Studies Institute, 1999)

Native Foods of the Americas

There are thousands of edible foods indigenous to the Americas that have sustained human and animal life since ancient times. For example, there are over 400 varieties of beans with only a few of the more common ones represented here. There are also many varieties of potatoes, squashes, peppers, and fruits native to the Americas. Thanksgiving is an ideal time to appreciate these foods and the Native Americans who learned how to cultivate them over thousands of years and generously shared this knowledge with others. Below is a list of indigenous foods from the Americas which demonstrate their diversity in terms of climate and growing conditions, type of food whether sweet or savory, along with a few interesting facts to celebrate and honor the indigenous foods of Thanksgiving.

Foods of the Americas

Indigenous Whole Foods from the Americas 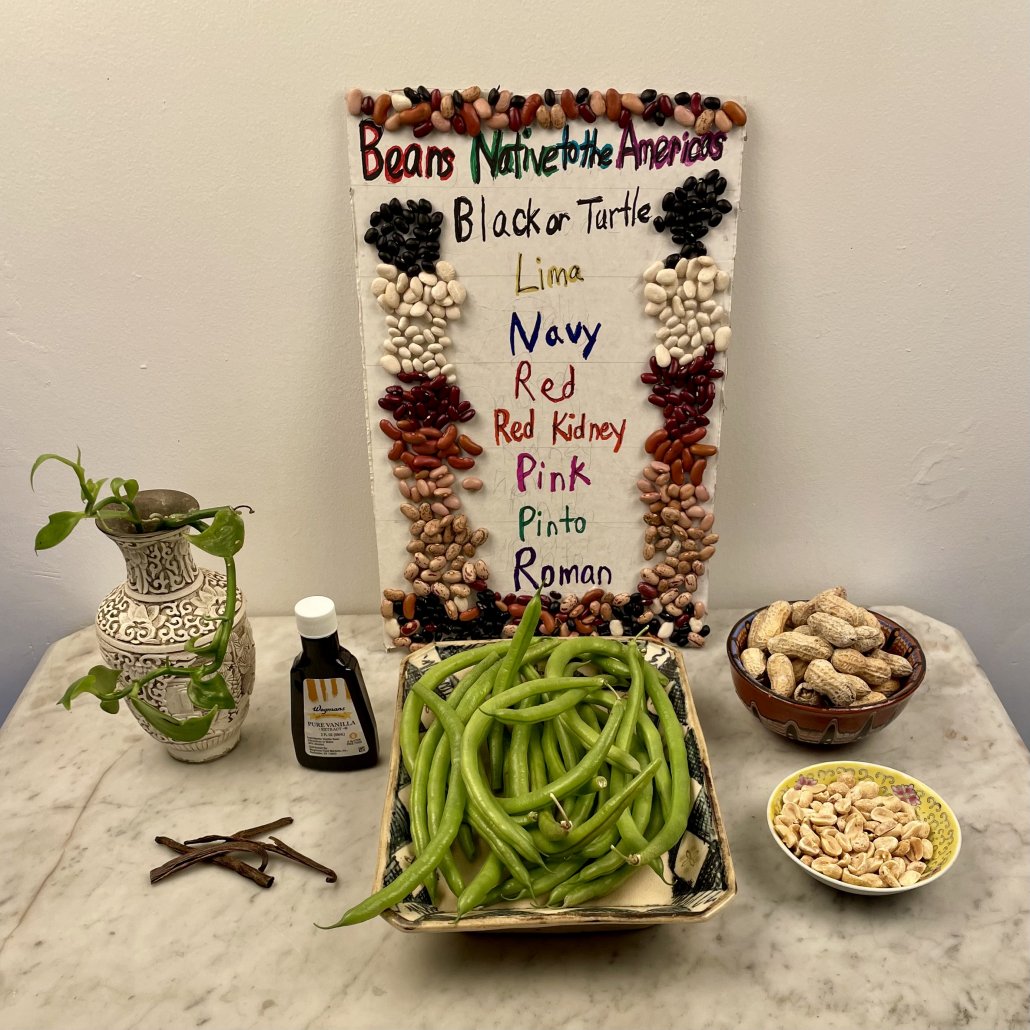 Sampling of Beans Native to the Americas

Beans are one of the oldest cultivated foods having been grown for over 6,000 years. While some beans are native to other parts of the world such as lentils, fava, garbanzo, and cannellini, the beans of the Americas offer a huge variety in terms of color and taste. Beans are high in protein, minerals, and fiber, low in fat, and don’t take up much space to store, nor do they need special care in preservation. Known historically as the “poor man’s meat” they are in desperate need of rebranding because they are inexpensive, full of nutrients, and can be stored in a clean dry place for years. Not only are they easy to grow and delicious to eat, but they also fix nitrogen into the soil enriching it rather than depleting it. From dips to soups, salads, and entrees, one never needs to grow bored with beans in their diet.

Most people do not realize that squashes are fruits because they contain seeds and most of the seeds can be roasted and eaten. There are summer squashes, winter squashes and gourds, some which become the perfect birdhouse. Squash can become water vessels or carved into beautiful designs as art objects or containers for storage.

Maize (commonly known as corn) is indigenous to Mexico where it was first grown and bred approximately 10,000 years ago. It was known as teosinte, a small edible seed from the grass family.  The teosinte seeds were harvested in the wild and then were planted and nurtured by people which changed the size and taste of the grain. Corn as we know it today is dependent on humans planting it as its seeds do not grow without human intervention. A tremendous amount of research has gone into breeding corn which is believed to be the most prevalent food crop in the world today. Not only has it been genetically engineered, but it is also used as animal feed, plastics, sweeteners, and fuel.

Cranberries have been eaten by Native Americans for thousands of years fresh, dried, or turned into energy bars (pemican), or made into juice They are a super food, full of antioxidants and contain healing properties. They often grow in bogs in the American Northeast, Canada, Northern Mid-west, and America west and Peru. Cranberries are perennials and are a vining shrub. They are harvested by flooding their grow site with water which makes them float and easier to harvest. Also known as “bounce berries” when they are fresh, they will bounce.

Wild rice is a grass seed. It grows in shallow water in the North American East and Mid-west and Canada. 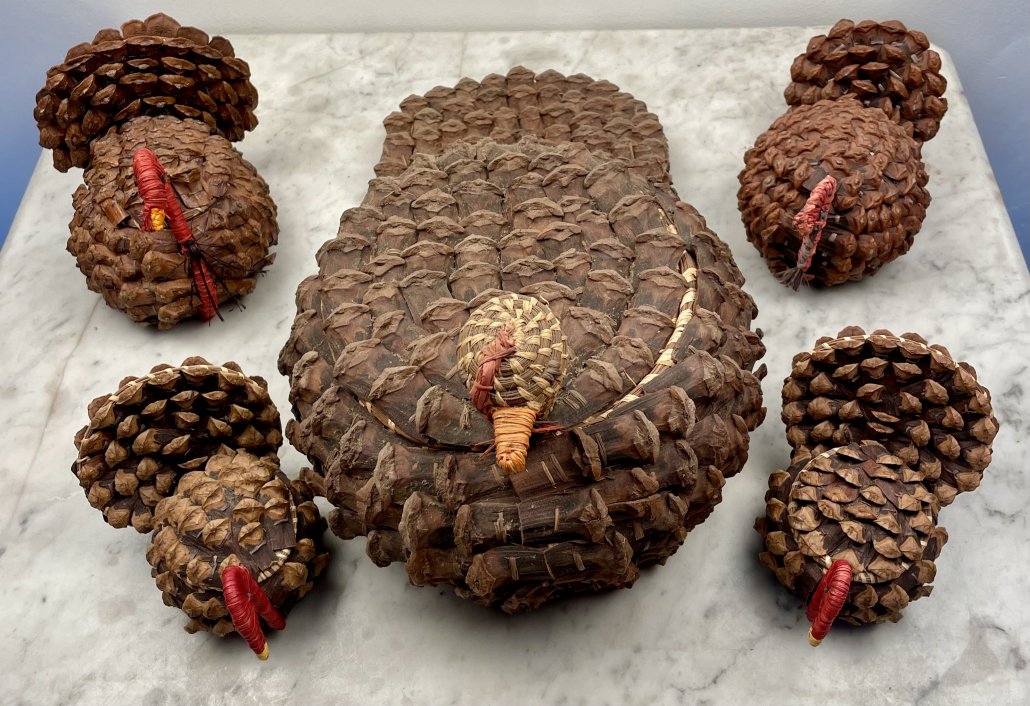 Special Thanks to Wegman’s for donating food & to Native Americans 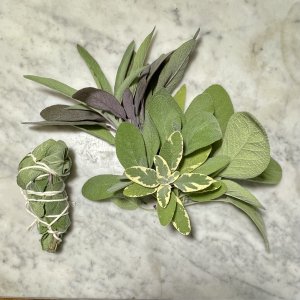 Sage Smudge is burned to purify the soul

Celebrating the History of Halloween